Rule #572: House divided against itself cannot not stand 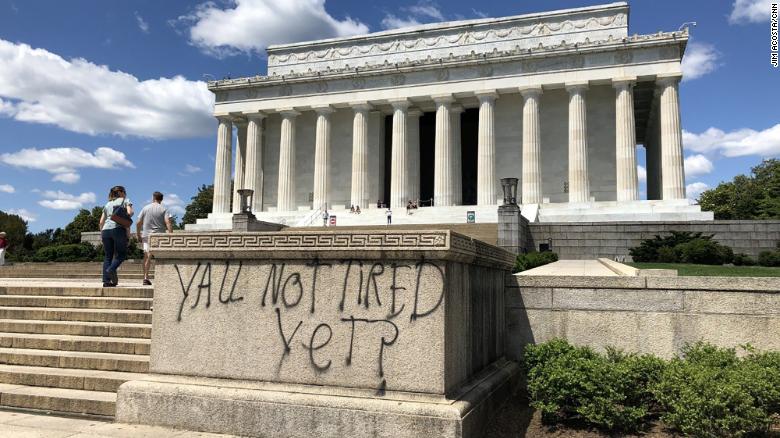 Rule #572:  House divided against itself cannot not stand

IN THIS TEMPLE AS IN THE HEARTS OF THE PEOPLE FOR WHOM HE SAVED THE UNION THE MEMORY OF ABRAHAM LINCOLN IS ENSHRINED FOREVER.

This sickens me. The stupidity, the hatred, the blame and insanity- it all sickens me.

The needless deaths of Eric Garner and now George Floyd sicken me. Yes, they were allegedly committing crimes but not capital offenses. The force by police has to have kept in check, this was murder and should be treated as a such. Police reform, discipline and training are all needed. We need to trust our police force again.

We are living in a country that is focused on blame and hate, we have lived through a crisis of the COVID-19 and came out of it not united but more divided.  Everyone is digging into their positions and piling barrels of gasoline around their foxholes. With the riots over the last few nights we have now begun tossing lite matches at each other. The fires will only get bigger and more deadly.

We are fighting over if we wear a mask or not, or if we fly a trump flag. The hate for our fellow citizens is overwhelming. We have stopped seeing ourselves as Americans but as part of a group that is either with us or against us. We are distrustful of everyone because they are distrustful of us. We have lost empathy. As looters are arrested others are bailing them out.

This isn’t about Antifa, white supremacists, Donald Trump , Joe Biden or anyone else you care to blame- this is about a house divided against itself.  We have begun to look at each other as something else, that because of our opinions we are different,we are less intelligent, less evolved, less human.

The people that are looting must feel that they are the underclass and as such can take what is not rightfully given. If you no longer look at the rich and often white as part of your world its no longer stealing, because in their world you have no rights.

Dr. Peck in his book People of the Lie: The Hope for Healing Human Evil  defines evil as “militant ignorance”.The people looting are not dumb, or less than human, they are people that have lost empathy for others. They are not stealing from the Foot Locker  to feed their families or protest a act of police brutality, they are stealing because they have made themselves escape their own conscience and rationalize evil behavior. They no longer have empathy for the rich, white, privileged and police- to them stealing from them is not wrong because they don’t care about them.

This “scapegoating” of other groups ( as Dr. Peck calls it) is necessary for evil to exist. I watched a video of a woman being beaten by looters in upper state NY, to do this they must have lost the ability to have a viewpoint of the victim, and become completely narcissistic. Watching the video, like the video of Mr. Floyd being chocked to death is to witness evil.

We must find justice for George Floyd, we must have empathy for the pain his family and friends must be enduring and we must change through listening.

We must find justice for those homes, businesses and in some cases lives have been taken by these looters. Both should be done swiftly, and decisively.

We stopped listening and have developed a covert intolerance to criticism and that is the pathway to evil. Something is seriously wrong with our society, and we need to take pathways back to caring about each other. We can disagree without hate.

Tweet
This entry was posted in Uncategorized. Bookmark the permalink.

3 Responses to Rule #572: House divided against itself cannot not stand